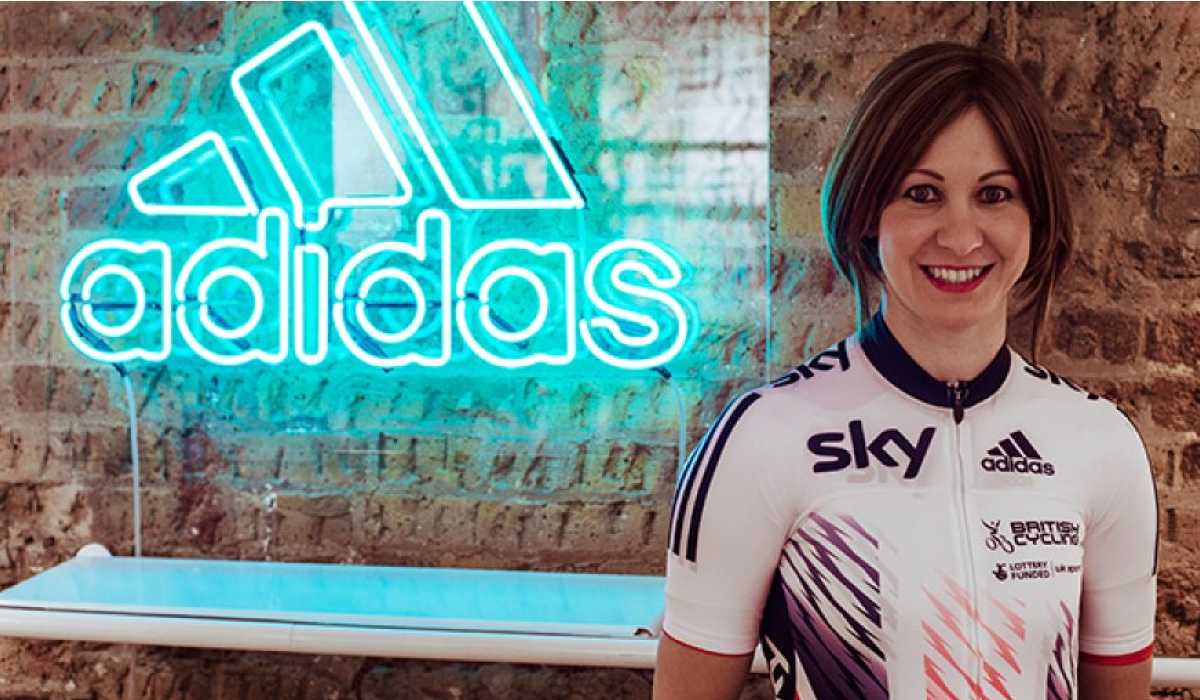 At the launch of the new adidas x British Cycling GB kit, which marks ten years of collaboration between adidas and GB Cycling, we resisted temptation to devour the jersey-shaped cake and instead spoke to Olympian, Commonwealth Games Champion and five times world champion, Joanna Rowsell Shand. Joanna chatted to us about motivation, training and the power of mental strength – but we began by reflecting on how it all started a decade ago…

You’ve got quite a lot of medals! How do you stay motivated to keep training?

This time last year I’d won the Commonwealth Games Gold and that completed my collection of one gold medal for every major competition. Before the Commonwealth’s, I thought to myself, “if I win this am I still going to be motivated?” I wasn’t sure if I was or not but after I won the medal that I was aiming for, within a week, I was already thinking about new goals and new things I wanted to win.

I don’t think you’re able to give someone motivation, you either have it or you don’t and I think the day you haven’t got motivation is the day to say “right, I am going to retire from top level, competitive cycling”. Very quickly I found new goals so I must be that sort of person that strives to always be better and I think in training, if you’re seeing personal bests and you’re seeing faster times and can lift bigger weights in the gym that in itself is motivating.

I want to know that I am being the best athlete I can be. At the moment I am still getting faster so that’s very motivating.

Re-winding a few years, how did you first get into Team Pursuit?

I was talent spotted as a cyclist back in 2004 and I got a place on the Southeast Region Development Squad for youth riders. At 16, I was actually one of the oldest on the squad and I was spotted for a different event, the Individual Pursuit which at the time was the Olympic event which was then changed. I think if Team Pursuit had been the original Olympic event, I don’t think they would have ever picked me because it requires different skills and my natural talent as a teenager pointed me towards the individual.

Is there a big difference in skills between the individual and the team pursuits?

They aren’t wildly different but there’s a lot more speed involved with the Team Pursuit and when it became a World Champion event back in 2008, it was a brand new event for women so we set up a team and I just seemed to take to it like a duck to water. I just really enjoyed going around the track that fast and I found that I never really knew I had those capabilities to be sprint based and have a fast start and be powerful, I’d always been considered more of a ‘diesel engine’ and I actually found that when I trained that aspect of my cycling, I was actually really good at the short punchy efforts.

Do you prefer being part of a team? You mentioned explosive power, do you train specifically for that and what kind of things do you do?

Team Pursuit was very new and exciting and I think it’s almost more nerve-wracking to be on a start line in a team. When you’re doing an individual event if you mess up, it’s just you that loses whereas in a team event if you mess up the whole team loses. I think I do thrive off that sort of adrenaline so you sort of really get a buzz and when it’s all over and you’ve won, it is a really great feeling.

It feels quite lonely being on the podium as an individual – it’s great to win individual events and being like “ok great, well done me” and pat myself on the back but when you’re up there with a group of girls and you’ve all worked hard together all year round and you’ve been through good days and tough days and then you can celebrate that victory together, I think that’s very special.

You mentioned explosive power, do you train specifically for that and what kind of things do you do?

We’ve been doing quite a bit of gym work this season so lifting weights mainly leg work, not upper body as we’re trying to remain aerodynamic on the bike so trying to avoid bulking up too much in the upper body but I seem to be quite good at building muscle without doing too much upper body, I seem to get quite big arm muscle so that’s quite interesting! And then on the bike lots of big geared starts, I really like using the big gears and trying to get that punch off the line.

Do you enjoy gym work?

Yes, so as part of my normal weekly training programme we do road cycling, track and gym sessions.This year we’ve really cut back on the road work which used to be my favourite, I loved being outside and going up the hills, not so much on a rainy day but I do like the freedom of being out on the bike. However I have really enjoyed the gym work this year. I think that’s the bit that’s kept me motivated, it’s a new stimulus and you can really see yourself going to the gym when you’ve pumping more weight on the machines. I think we’ve seen some good gains.

What would you say were the more mental skills that you need to compete at such a high level?

I think mental skills can come higher than physical skills especially our team, we’ve been Olympic Champions, we’ve been world champions, we’ve been world record holders so whenever you get in the saddle people expect you to win. I think that’s the toughest thing when the general public and the media all think that it’s a guaranteed gold medal and it never is, you always have to work your absolute hardest and I think the mental side of it to try and block out the pressure and focus on your own personal performance, ignore the times the other teams are doing is really important.

Have you seen this first hand?

I’ve seen a lot of girls throughout my career come and go from the programme that have been really talented but I think the mental side really separates the physically talented athletes from the athletes that could go on to be Olympic Champions because you need to be able to deal with that pressure, you need to deal with the day in, day out training when perhaps you don’t feel like it. It’s not about enjoying it, it’s about getting the work done, there are some days when you feel like you’re living the dream and some days when you think, this is hard today but it’s those days that really make the difference. A lot of people do come and go that haven’t made it that are talented in one area but not across the board.

And last but not least, what would be your adidas kit piece of choice to wear?

My favourite outfit for the gym are the adidas Energy Boost trainers, lime green training socks and then colourful tights and an orange top. I love the bright colours and it all seems to work. I like floral too. Some people have this misconception that sport can be quite masculine but I think there is so much nice, feminine kit out now. As a bike rider I like to look good, feel good, ride fast.

adidas and British Cycling celebrate its 10 year anniversary with the launch of the teams new kit, available on adidascycling.com, or join the conversation @adidasuk #owntheroad.