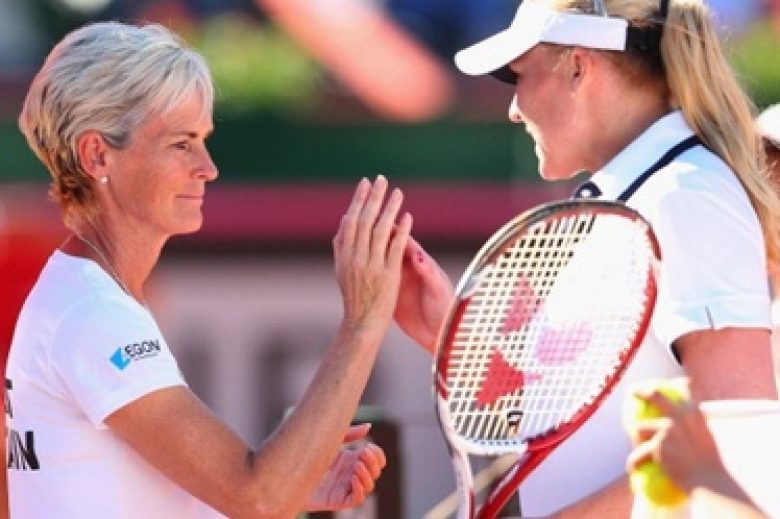 Legendary Scottish tennis coach, captain of the British Fed Cup team, mother to professional tennis players Andy and Jamie, Judy Murray has many hats – but she’s about to add another as an advocate of women in sport with the launch of her innovative programme to get young girls into tennis.

Miss-Hits is a fun starter programme aimed at girls aged 5-8, that blends indoor training sessions with interactive, online sessions, dance, games and animated characters to teach the basics of tennis in an original and engaging format. In light of the shocking statistic that girls are outnumbered 4:1 at entry level, Judy felt that drastic action had to be taken to attract more girls to tennis. We spoke to Judy to find out more about the programme and her assertion that tennis needs to be ‘girlier’.

Why are girls so significantly outnumbered at entry level?

It definitely has to do with not having enough female coaches, particularly at entry level. Little girls are used to having female teachers, they are used to being around their mums – they’re not always comfortable with male coaches who are in effect strangers who they don’t know.

When we did the research, quite a significant thing was girls saying that they didn’t like tennis because they didn’t like getting cold, and some of them didn’t like it because of the boys – they were too noisy or too competitive or too physical. We had to make our sport more attractive to girls. To get more girls playing, we had to acknowledge that and utilise it for this to work.

So we started to look at what you might call barriers or off-putters and then started to look at all the things that little girls do like doing. And that was anything from music and dancing to being with their friends, to animated characters to nail stickers – and we started to try to piece it all together into a programme that was focussed on tennis.

Miss-Hits is an all-girl programme, is there an argument that girls could benefit from a mixed-gender environment in sport?

I think that everyone is different. I had two brothers and a very sporty father, so I was never uncomfortable in an environment where there were boys. But I went to a girls’ school and without question I think that allows girls to put themselves forward to be more confident in front of your peer group than in front of guys.

I would say that even in life, that whole idea of even being confident enough to just ask a question in front of a predominantly male group is tough. I know as a female coach I was always thinking, “I want to ask something, but I don’t think I will because actually maybe it’s not a good question,” – you second-guess yourself and there’s a fear of appearing as though you don’t know something.

There are some girls who are perfectly happy and will thrive in that kind of mixed-gender environment, but I think we have to have the alternative option and I think the research will show that girl-only groups are likely to retain girls in that sport for longer.

How important is it to have female coaches to act as role models for girls in tennis?

We’ve trained up just over 120 female coaches, across the country to deliver the programme and it’s been very successful and very well received.

I think if you bring women together they will make a lot more things happen; in general they tend to be more organised, perhaps the male coaches are in to the “doing” bit but not necessarily the detail of the admin, organising and phone calls etcetera.

Miss-Hits is not a technical course, you don’t need to be a qualified tennis coach to run it – you could be another sports coach, you could be a teacher or a parent – you need to have some kind of license to work with children, but it is all about fun and games. It will help us to increase a female workforce at entry level without us having to technically train people to teach tennis.

We need more women coaching, in order for girls to see that coaching a sport is a career that they can aspire to. We need to make sure that there is a pathway so that all of the females can progress on a clear, defined route.

We designed it around six characters who we’ve had animated for our website and app. it’s a 12-week programme of activity and each week is about one of the characters, and each character represents a tennis shot. Faith Forehand, for example, has her own signature music, dance and trick-shot.

Tennis is a complex game, but we make everything very simple. We use subtle learning because children will learn best by copying – they don’t need lots of technical information at that stage, they just need to be having fun and starting to develop basic skills.

It’s all about the social group because it’s one of the biggest things in girl’s sport – when your friends start to drop out is often when you drop out because you don’t want to be going along on your own or just with boys.

There is an awful lot to do, but this is the starting point because we have to get girls in and we have to expand the female coaching workforce and this is my stab at trying to make it happen.

Take a look at the Miss-Hits website and find out how you can get involved here.